Just pre-ordered the new WOO 3.0 for registering my kitesurf jumps! Now let’s find out if we can also make a Garmin App (just like on Apple & Android watches) that can connect to the WOO.

Is the new feature in the latest SDK ‘Action Intelligence’ with access to the accelerometer data a good starting point for calculating your kitesurf jump heights?

Next we’ve got probably the feature with the most potential, which is Action Intelligence.  This allows apps to access and record accelerometer data at up to 25hz (aka 25 times a second…aka every 40ms).  The idea behind this is to enable apps to start to do more gesture sensing and control.  As well as recording of those movements.

For example Garmin had a simple pitch counter app, that would allow someone wearing the watch to enable the app to count how many baseballs they threw as a pitcher.  That’s a simplistic example, but it worked reasonably well when demoed to me.

The feature allows companies to gather 3-axis accelerometer data, but also to leverage Finite Impulse Response (FIR) and Infinite Impulse Response (IIR) filters which and then filter out noisy day (or include such data).  The idea being that a developer could target just the exact accelerometer data they wanted for their specific application.  All of which can be recorded and potentially processed elsewhere on a 3rd party platform.

Finished the e-book and based on the sample apps I just created a very basic app with a title, menu and a picture. Next step is showing information from the watch like speed / height / heart rate inside the app. 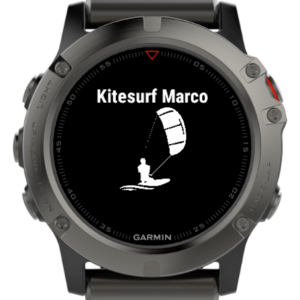 The Garmin Fenix 3 HR was on sale at Amazon, so just ordered it ;-). So maybe I postpone my Garmin Fenix 5x for a while.

Still reading the e-book where one of the instructions is installing the software on your computer. Just installed and configured the software successfully on my Mac and now have made my first (dummy) app that shows a monkey on the Garmin Fenix 5X simulator. 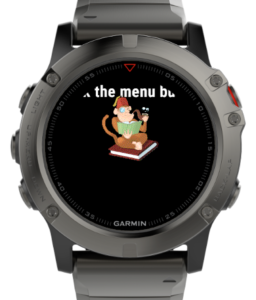 Did a quick google with Garmin SDK (software Development Kit) and found out that I need to do something with the Garmin Connect IQ platform to develop an app. Found a e-book on the Garmin developer site that I am going to use as a starting point.

Things that I find important about a wearable device in relation to kitesurfing:

I think that a Garmin Fenix 5X will do the trick, so I putted it on my wishlist and will buy it when it is available.

As a kitesurfer I want to have an app on my wearable device so that I can track my kitesurf sessions in real-time.

Let me know if you have any tips, questions or feedback via Twitter @marcohartman